For the original arrangement that Survine (mostly Laura and Lloyd) did, the venue was at the MozillaHQ and the target group was mainly XMPP people with a sidetrack of IoT.

Since I have done some IoT stuff with TVs and set-top boxes, I found it pretty obvious to do a talk about that, so a couple of days before the meet up I started to work on some ideas and some slides that I could present. I talked with Lloyd (the co-arrananger of the meet-up) and he liked the idea.

But the a couple of days before the meet-up, the venue changed. Mozilla cancelled our room, Survine had to find a another venue.
Laura and Lloyd then actually managed to get us into a big IoT event that was going on the same day (@thingmonk) and the day after. 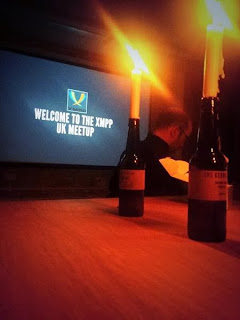 Since the venue changed, the audience changed a lot - now the people that were coming for the event was IoT people and not firstly XMPP people. Me and Lloyd discussed if it wasn’t to be better if we were to present a general (but short) intro to XMPP. So my talked was cancelled. That was ok, even though it could have been fun to see peoples reactions that XMPP is already used in TVs and set-top boxes and the environment behind that.

So I’ve meet up with one of my old friends going to London the day before, sunday the 1’st of December.
Mostly for me personally it was not only about the presentations but more  about to meet people and have a chat before and afterwards.

When me and my friend arrived Sunday morning, we wandered around, located our hotel, got some food and a drink. Later the same evening we met up with @JoachimLindborg (which was doing a presentation on XMPP and IoT). We had a couple of beers and some good talk about what XMPP could bring for the IoT people and some interesting perspective was discussed. (I a mostly inspired when I get a good beer) :-)

Monday we went to google campus,working a bit and darkening coffee.  Met up with Lloyd and had a chat and worked a bit more.

The meet up was during the evening, so I reached to do a bit of work and research before we went of to the event.
At 17 o'clock we wandered of to Shoreditch (works village hall) where the @thingmonk event were residing. When we arrived we saw only candle lights from the out side. I thought that looked pretty cozy and a fun thing to do, but actually found out that it was caused by a power outage.. Damn! 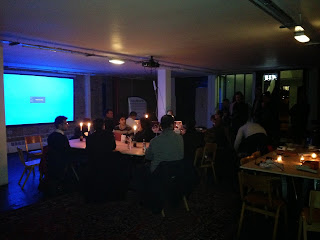 >
People was suggesting all kind of thing to get us some electricity. We were even looking for a diesel engine. That could have been some paradox, when people in the same time was talking about IoT, green tech etc. :-)

We ended up with electricity from the neighbours (a local bar I think). So the tables was plastered with power cables and whatnot (see picture).
With the electricity going again (on a reduced level and candle lights) we could begin our little meetup.
The meetup started like any good meetup, with beer and burgers (gesture from survive).
So after chewing some burgers, chips and some beers we began with the presentations.
First presentation was from Lloyd, who did a quick tour of XMPP and how it in general stick together. The presentation can be found here.


Its actually pretty hard to compress a general intro of XMPP into a half hour slot - but Lloyd did a good job in that. Last time I tried to do a XMPP intro (see my presentation here) it lasted for 1.5 hours. :-) Maybe its just me that likes to talk and do hands on stuff. ha ha.
After Lloyds talk, the electrician guys finally came to the rescue and saved rest of the remaining day. They somehow got the electricity get going again.  Hurray!!! 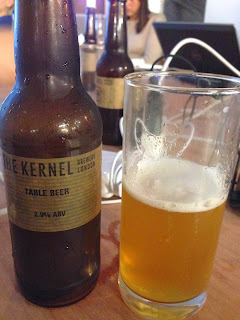 The timing couldn’t be better, joachim was on and started his presentation and we could finally attach some more devices (mainly Raspberry pi’s that Joachim had brought).
So the presentation was about how you can control and meter your connected devices. We had around 10 Raspberry pies connected at the meetup and some connected in Sweden (via. XMPP of course). So after some walkthrough of the architecture behind it and a presentation of some new XEP (XMPP extensions) for IoT, we started hacking some python.
Some of the stuff was running locally on the attendees machines and some on the raspebberys. People started connecting, and we noticed the light switching on and off in Sweden, people getting metering data back etc.
When the presentation was over peopled stayed and hacking for a bit over a beer (great porters by the way!). People exchanged ideas, asking questions and I hope got some understanding of what XMPP can bring IoT.
Personally I had most fun just talking with people about XMPP over a beer. I chatted a bit with Florian and Matthew around servers, and also running XMPP without server (link local stuff like the Bonjour protocol).

All in all it was a small but funny venue, but I think that the meetup of people could be even better - but I really think that just might have something to do with the power outage and the bit of chaotic start we had. :-)

Some of the stuff that Joachim presented and hacking we did can be found here:

I am still a bit eager to present my idea around medias (TV, set-top boxes etc) and second screen. There have been some proposals like the DIAL protocol etc. but most of them have some issues that actually already is solved in XMPP.

So I’ll think i’ll might try so sign up for a lignin talk at FOSDEM - regarding IoT - TVs and second screen (and the like) over XMPP. It could also be cool to talk with some of my fellow XSF guys around my ideas and implementations I have already done, to see if it could be formalised and standardised into a XEP.

-Cheers and see you in Brussels (and London?)!